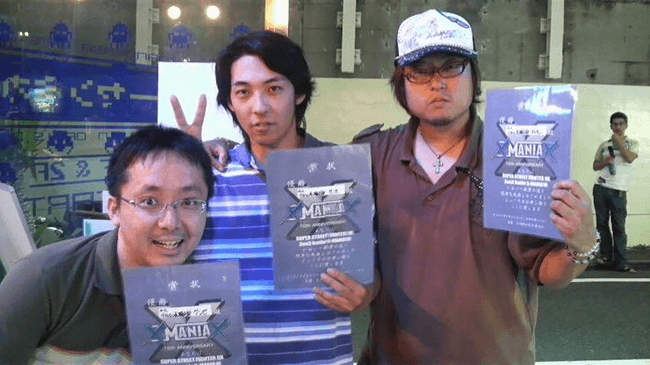 STR: Hello everyone, recently NHC and STR put together an inteview for Aniken, and now we’re following up with his brother, Otochun! How did you get started in Street Fighter 2, and why did you pick Chun-Li as your main character?

Otochun: Initially, I went to the arcades with Aniken to have a match and I just somehow chose without thinking. It was surely a turning point of my life.

Otochun: My favorite match would be against Ryu or Ken. One of reasons is because most of these matches were played against Aniken. It’s also because both Chun-Li’s strengths and weaknesses show up when you play against Ken. You have the advantage as a Chun-li player, but if you don’t know her well enough, chances are, you might lose against someone who’s as good as Aniken. That’s why I think it’s a great combination. I also think Ryu can fight on equal terms with Chun Li. Because of his popularity, there are so many players with various levels of skills that you’d definitely end up in a match with him no matter what. On the other hand, I dislike T-Hawk the most. His Tomahawk Buster or Condor Dive moves are the worst of all the other combos I’ve ever encountered.

STR: What match for Chun-Li do you think is the easiest? Which is easiest for you, personally? How about most difficult?

Otochun: I think a match with Sagat would be the easiest. Chun Li has an advantage at both distant and close combat. The super combos are also easy to use against him. Vega is the worst, IMO. He can be dominant with his both ground-based attacks and airborne attacks like the Flying Barcelona Attack, thus being the greatest threat to Chun Li.

STR: What is your personal tier list for ST, and where do you feel Chun-Li fits? Do you have any thoughts on people who choose high tier characters?

STR: Most of the lower tier characters don’t differ much in strengths.

Otochun: It’s a world where you’re constantly engaged with someone else, I think it’s anyone’s choice to pick any character they wish, but I can’t respect people who pick strong characters just because they can’t win otherwise. What’s important is picking a guy who suits you best.

Otochun vs Daigo Umehara from the Insanity Hyper Street Fighter II: The Starting Over tournament.

STR: What is Chun-Li’s biggest weakness? How do you overcome them, and do you have any tips for new Chun-Li players?

Otochun: I think Chun-Li’s weakness is the difficulty to use her anti-air skills well. I practiced using these skills depending on my opponent’s position and how he/she is close to me. As you get used to using these different skills and combos, anti-air combat and ground combat should be easier for you.

Otochun: Handicap: I’d imagine weakening the kikouken. Boost: Make the kikouken fly through the edge of the screen instead of letting it dissipate depending on its strength.

STR: Since we’re on the topic of changes, what do you think about Super Street Fighter 2: HD Remix? Are there any changes you like? Any that you don’t like?

Otochun: I honestly like how the strong characters were slightly watered down to provide a lineup of well-balanced characters, but I just don’t like how Dhalsim wasn’t watered down.

STR: If you had to personally change something about SSF2X, what would you change? Do you have any thoughts on trying to make it more balanced? With that in mind, would you like to see a continuation of the SF2 series like more balance improvements or new characters?

Otochun: If they make a sequel, I’d like them to listen to other fan’s opinions to make the game more balanced. Weaken strong characters to give a more balanced touch. I would like to see new characters as well.

STR: What do you think is the most important thing to focus on when you’re trying to improve as a player and for those new to the game, to focus on and how to stay motivated to keep playing?

Otochun: Keep playing with other players. Beginners should concentrate on learning basic skills and combos. It’s important to develop your own playing style.

STR: Do you feel it’s more effective to have one main character, or learn a few characters to handle various matchups?

Otochun: I think it’s best to know and play with one character. I think it’s great to be able to master so many characters, but it’s not something to admire.

STR: When you were most active, what was your main strategy for training? In our recent interview with your brother, Aniken, and he mentioned during training you both would point out each other’s weaknesses and try to work on them. Can you tell us more about that? We find that very interesting!

Otochun: When I’m playing against another player or just watching other players fight each other, I notice a lot of things. When I play with Aniken, we point out each other’s weaknesses. I think the good thing about being twins is that we tend to be pretty honest to each other despite our weaknesses. I often ask Aniken after a match, “how bad was my performance?” and seek advice.

STR: Aniken said when it came to tournaments, you were the best competitor. How did you prepare yourself and keep your mind focused against your weaknesses to compete against fierce competition, especially in tight situations or when you were on a losing streak?

Otochun: A tournament is a once-in-a-lifetime match with another player. Whether you win or lose, you have this strong feeling of playing within your own set of rules. Even if you lose, what’s important is whether you accept it and learn from it. Even if you are in a tight situation, it’s important to stick to your own fighting style and not change it.

STR: Which brings me to, what was your most heart-breaking loss?

Otochun: There was a time when I felt a lot of pressure from another player, rather than from the match itself. I couldn’t play well and still regret it.

STR: Since we just asked you about tournaments, would you be interested in travelling internationally to compete in ST tournaments, such as TOURNAMENT OF LEGENDS at EVO in the USA or X-MANIA in Europe? What are your thoughts on last year’s Tournament of Legends and the grand finals? By the way, we would love to see you compete at this year’s SF2 EVO Tournament ?

Otochun: I always dream about competing internationally, but there are a lot of difficulties. I did watch last year’s EVO and saw the some scary things regarding SF2.

STR: What tournament settings do you prefer, the rowdy USA scene or what we in the states see as the polite Japanese Scene? It also seems like team tournaments are popular in Japan but not in the USA and Europe, do you prefer one or the other? What other thoughts do you have about international tournaments vs ones held in Japan?

STR: How did you feel about the recent East vs West (20v20) where the Kanto side won 2-0? Do you think the results would have been different if you and Aniken were there?

Otochun: I’m not too surprised with the outcome, since the battle took place in Kanto and there weren’t too many players from Kansai. Of course I would have joined if it took place in Kansai. Regardless of whether Aniken and I joined, I’m sure we would have had an exciting time. Next time, I’d like to see a 3-group tournament where Kanto, Kansai, and Chubu (Nagoya) would battle each other instead of Kansai teaming up with Chubu.

STR: If your Tougeki ’03 team were to face off against their present selves today, who would win?

Otochun: I think I would beat myself from 10 years ago. I believe I’m more spiritually and technically better off than I was back then.

STR: In what ways has the Osaka ST scene changed since the closing down of Nagase UFO? It seems that both Aniken and yourself, as well as many Kansai players are inactive in part because of Nagase UFO shutting down.

Otochun: After Nagase UFO closed, I have to agree there was a decline in SF2 matches. Now we have a new place called Autobahn (or Outburn) and it follows Nagase’s ideology. A lot of us like to hang out over there and the game scene doesn’t differ much from the old Nagase UFO.

STR: How long do you think the arcade SSF2X scene will continue to last in Japan? What are your thoughts about people playing online as the arcade scene dies down, and do you play online when you can’t go to an arcade?

Otochun: I play mostly online during the weekdays. I go to Nagase Autobahn on Saturdays.

STR: Some Osaka players have moved to Tokyo such as Komoda and YuuVega. Did this impact your decision to go inactive? Are there other players who aren’t active anymore that further caused your inactivity?

Otochun: It doesn’t affect me, but it’s kinda sad. There was this player called Inoki is back and he’s the one who taught me the tough side of SF2. He’s kinda like my mentor and I do miss him a lot.

STR: In your opinion, who are the strongest players in Japan? How do you feel about the other top Chun-Li players like Nuki or Keishin? Do you have any favorite Japanese players who aren’t well known internationally?

Otochun: I always believe I’m one of the best. I think MAO is another tough player besides me. In Kansai, Marubozu Honda and Murasaki Vega is really tough! I always watch other Chun Li players’ moves on video and analyze their moves and tactics. I’m always eager to learn things I don’t have. They’re all great players.

STR: At any point in your SSF2X career, who was your strongest competitor besides Aniken? Do you have a fond rivalry with someone besides your brother?

Otochun: I’d say Shooting D (Ryu). During his heydays, he was one of the toughest Ryu players. ARG is another tough opponent; he’s one of the first players to master Vega.

STR: Are there any other activities outside of SF2 that you are fiercely competitive against Aniken?

STR: This interview is international and there will be SF players across the world reading it, anything you’d like the people reading this interview about you to know, or any final thoughts?

Otochun: If you guys ever get a chance, we’d like to welcome you to Nagase Autobahn. Aniken and I would be honored to have a match or two.

STR: Otochun, we really want to thank you for taking time to reply to our interview! We would love to hear more from you and your brother in the future, and the ST Revival and No Honor Crew members would love to see you at this year’s SF2 Tournament! However, before we end the interview, we have one last, very silly question! How many times have you heard “Kikoken!” in your life?

Otochun: I am the guy who shot the most kikoukens in the world!!

STR: (Special thanks to everyone involved in the interview, and to those members on SRK and NHC for supplying questions for Otochun!)

Back to Player Interviews
Scroll to Top