2014 was another amazing year as the entire community around the world celebrated the 20th anniversary of Super Turbo with big events in Japan (Gian Recital, Superstar Cup, X-Mania), Europe (IIX 20th Anniversary, Stunfest, X-Mania Europe) and the USA (So Cal Regionals, 2 Old 2 Furious, 37 Reloaded, TOURNAMENT OF LEGENDS II, X-Mania USA). Super Turbo once again had ToL II qualifiers at nearly every major in the United States as well as Toryuken in Canada, IIX 20th Anniversary in the UK and Stunfest in France. Now that the year has passed, and a new year of Super Turbo madness is set to begin, we’d like to look back and give recognition to the players and matches that fueled the amazing events of 2014. 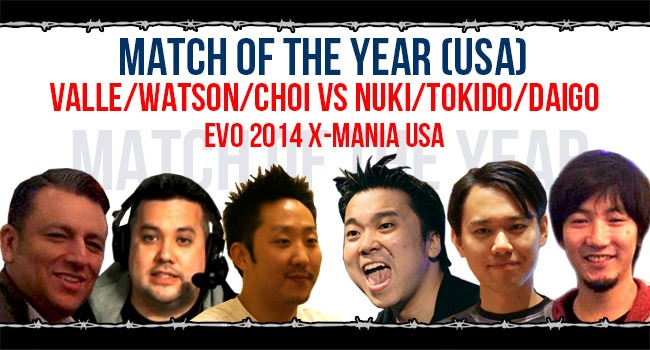 MATCH OF THE YEAR

In the MATCH OF THE YEAR category, we want to call out a battle that really reminded us of our motivation to watch and play Super Turbo. Comebacks, upsets, hype, emotions, this fight had it all, and anyone who had the pleasure of watching it can understand why this game has stayed alive for so long.

There were many incredible matches througout the year and at EVO 2014 in ToL II and X-MANIA USA but nothing had the hype and the old school magic and nostalgia of the Top 8 X-MANIA USA match on the EVO stage that featured some of the biggest names in FGC history: For Team OGSF: The three OGs of the Street Fighter world: Mike Watson, Alex Valle and John Choi against three of the five Gods of Japanese fighting games: Nuki, Tokido and Daigo Umehara.  Despite the fact that most of these legends don’t regularly play Super Turbo these days, you never forget how to ride a bike and they still put on a great show that thrilled the crowd with a victory for the American team! 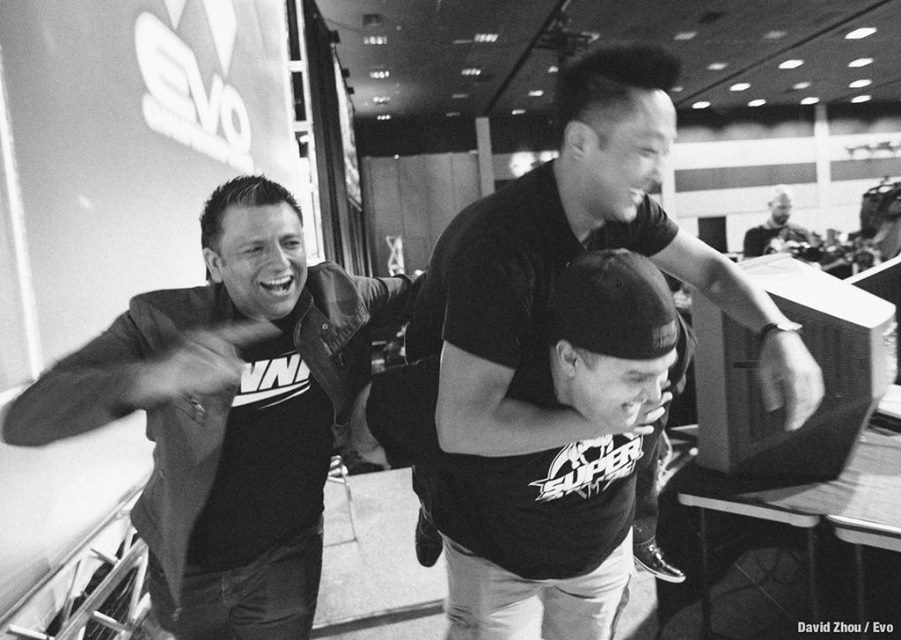 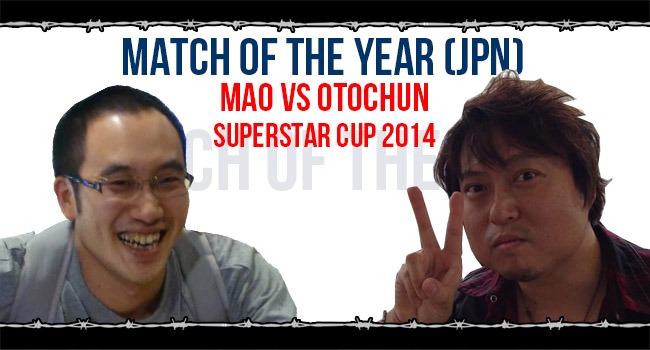 PLAYER OF THE YEAR (JAPAN)

Although Japan is no stranger to high-level and exciting matches on a weekly basis, this one was truly a battle of the titans. Over the years, Japan has produced many a strong player who has made a name for himself known all over the world, but this match showcased the undisputed top 5 players in Japan right now.
Otochun has made a strong name for himself as an absolute monster in tournaments since the early days of Super Turbo by having very solid fundamentals, great reads on his mixup game, and a high consistency of execution. His mental fortitude has been tested many times through many tournaments over the years with both high-level competitors and a very unforgiving tournament format, but his level of performance has certainly set the bar for competitive players all over the world. MAO is relatively new compared to some of the veterans of the game, having only played the game since the mid-2000s, but he has had strong results in recent years. As a student of the legendary Claw player known as ARG, he has been characterized by having very strong reactions, a fast-paced style of play, and possibly the strongest wall dive game of any Claw player.
Put these two on opposing sides of an arcade cabinet, and you’re bound to have an exciting match that showcases high-level ST at its finest. We look forward to seeing many more exciting matches between these two players in the future, as well as keeping an eye on other players who are going to step up their game in the coming year. 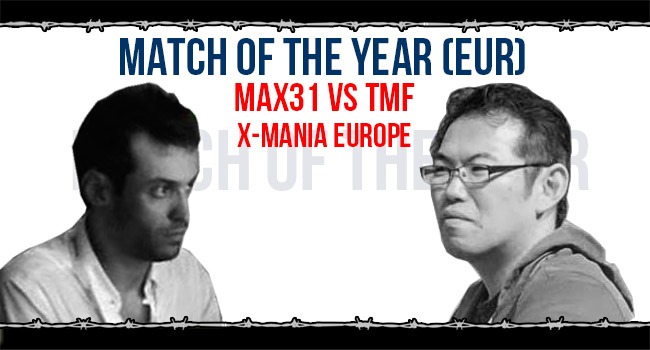 PLAYER OF THE YEAR (EUROPE)

This match alone is proof that Europe definitely has world-class players of their own, along with the fact that supreme mastery of one’s character can produce greater results than any conventional tier list would have you believe. Watching MAX31’s incredible journey as he battled his way to Grand Finals was absolutely amazing, as he not only had to contend with Europe’s finest, but also two travelling Japanese players intent on winning a tournament that bore a name of such prestige.
With a grand finals set that showcased both extreme focus, a strong neutral game, and a complex mixup game, this was definitely a match that had all of Europe cheering for MAX31. TMF has made a very strong showing during X-Mania Europe with his Zangief by deploying a strong combination of fast reactions and grab setups that caught a lot of players off guard. While TMF was relatively unknown in the international community, his performance and experience at both Evo 2014 and X-Mania Europe has certainly put him on the map, and many players were eagerly waiting to see if he could MAX31 in his tracks and pull off a clean victory.
But in the closing moments of the match, it seemed clear that MAX31 was to be victor. As he rose up and celebrated his well-earned victory, a new champion was born, and the field of competitors to watch out for just became a little bit bigger. The dream is alive and well. Cammy finally won a major!
Honorable Mention(s):
X-Mania Europe 4 3on3 Finals – Relinquished/Kaosflare/ORF vs Mattsun/TMF/Omnislash
Stunfest 2014 Finals – Balcork vs Justin Wong

PLAYER OF THE YEAR (USA)

The PLAYER OF THE YEAR award is given to the player who has consistently placed in the upper-tier of major tournament results and is recognized as the top player of their region. As a true embodiment of competitive Super Turbo, the player makes every match exciting and shows us the level of discipline necessary to be truly great in any game.

AfroLegends narrowly missed the last Player of the Year award in 2012 to Damdai, but this year his hard work and training paid off. Afro started off the year by winning the big So Cal Regionals ToL II qualifier by beating a tough field of competitors before meeting up with Damdai in the Grand Finals. At EVO 2014, he battled through an intense bracket to place 5th and become the highest placing US competitor. In X-MANIA USA, he teamed up with Damdai and Ganelon to form Team Special Forces and they placed 3rd defeating Team Europe and Team OGSF to decide 3rd place.

PLAYER OF THE YEAR (JPN)

What more can said about MAO? Claw is recognized as arguably the strongest character in the game but MAO has mastered the character to levels no one else ever has done. And he is a top notch showman to boot as he entertained the crowd and all the viewers watching on stream at EVO 2014 with his pro wrestling heel-like tactics. MAO did face very strong competition in Otochun and some would say that Otochun got the best of MAO this year in the Superstar Cup finals, but with MAO’s major accomplishments at EVO, winning TOURNAMENT OF LEGENDS II and anchoring his team in the X-MANIA USA finals to victory with a reverse OCV over Noguchi, Kurahashi and Hanashi, MAO is well deserving of this award after narrowly losing out the Player of the Year award to Kusumondo in 2012.

PLAYER OF THE YEAR (EUR)

This was a very difficult category to come up with a winner with ORF and Balcork both performing well in UK and French tournaments respectively, both qualifying for ToL II and teaming up and advancing to the X-MANIA USA Top 8 finals but in the end, the nod narrowly went to MAX 31 for his great accomplishments at X-MANIA Europe and winning the X-Mania Europe Solo tournament. Congratulations Max!

Our final category is important to the survival of any game. Through determination, practice, and a genuine enjoyment of the game, this player has climbed from the novice ranks to a level that most players spend years to achieve. We encourage anyone, of any discipline, who is still working their way up the competitive ladder to use this player as an example of what can be achieved with enough motivation.

Another very difficult category to choose just one winner as there were a number of players who really leveled up their game this year including Miller Time (defeating Daigo in X-MANIA USA pools), Moocus and Fromo (both qualifying for ToL II) and players like Mr. Igloo who made a dedicated effort to attend as many offline sessions as he could (Super Arcade weeklies, SCR, EVO, WCW, 37 Reloaded) and really upped his game but the player who may have made the biggest jump was eltrouble.

After stagnating with Ryu/Ken and Guile, it took only a year and a half or so making the switch to Dhalsim in early 2013, eltrouble’s hard work and dedication finally paid off. He slowly started placing high in weekly WNF tournaments and soon started winning a majority of them. He came close to qualifying at the Super Arcade ToL II qualifiers before finally achieving his year long goal of qualifying for ToL II at Saltmines in June. He still dedicates a lot of his time to organizing tournaments, events and also the weekly Super Turbo Saturday show with Sergjiev so he can be found all over the place in the SoCal and ST community.

PLAYER OF THE YEAR (EUR)

There were a number of people who provided valuable input to help decide these awards so a special thank you goes out to all of them for assisting. After 20 years, it’s almost impossible to believe that this may have been the strongest year ever for Super Turbo. It was incredible to see the communities across the globe growing closer to each other and working together to put on amazing events like ToL II, X-Mania USA and X-Mania Europe to celebrate the 20th anniversary of ST! We can only imagine 2015 will be just as amazing!