Comeback defeats Atari in the grand finals of the ToL3 Qualifier at Final Round and joins krost on the ToL3 poster! 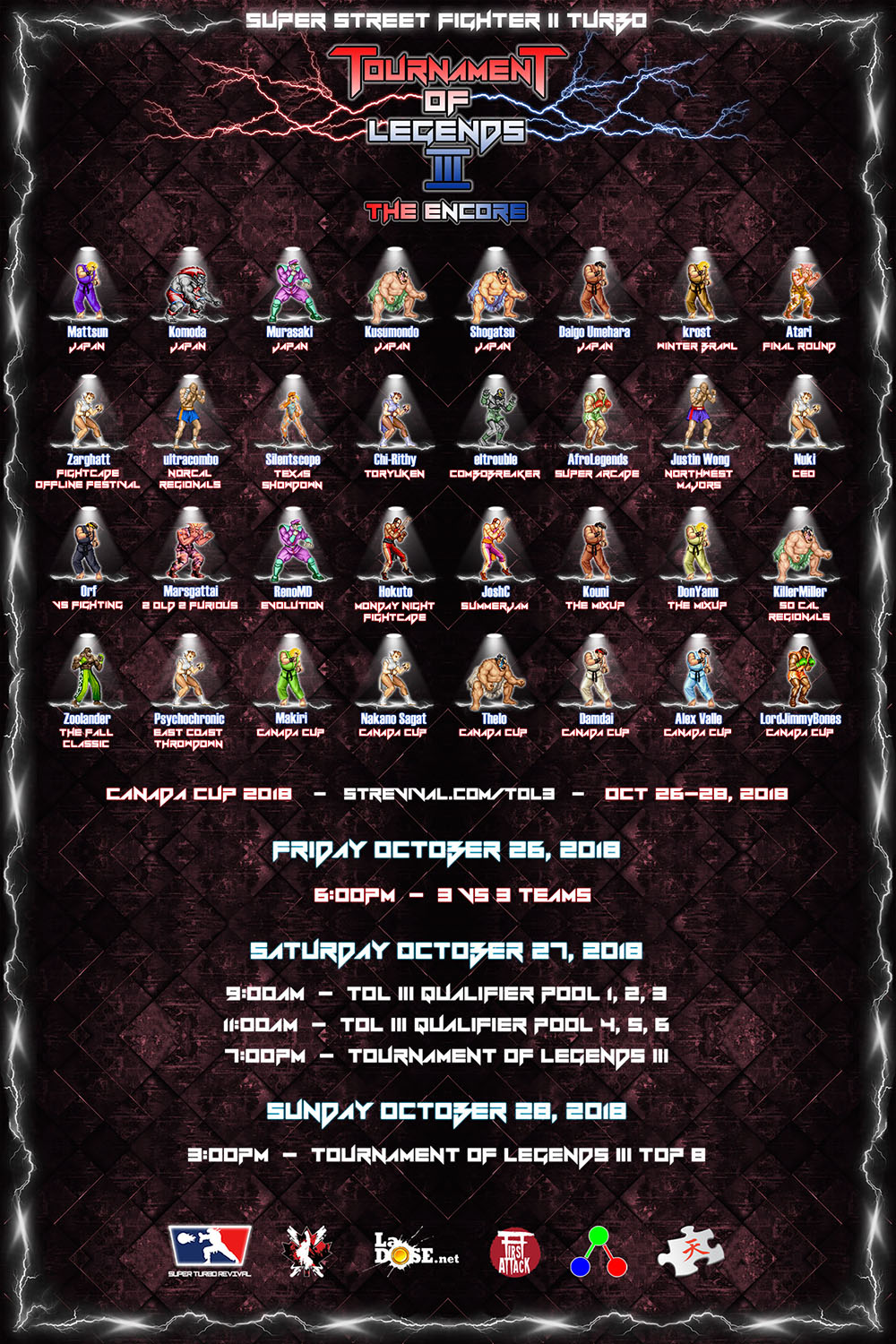 Fightcade Offline Festival Joins as a TOURNAMENT OF LEGENDS 3 Qualifier!

We’re excited to announce that this month’s Fightcade Offline Festival (FOF) taking place in Northern Spain will be a TOURNAMENT OF LEGENDS 3 Qualifier!

Note: The tournament is open to all players however the qualifier spot will go to the highest placing European player.

Visit the TOURNAMENT OF LEGENDS 3 page for more information.

At various points of the campaign, we will use the funds raised to invite Japanese grandmasters to join the tournament.  In addition, we’ll apply funds to other expenses, such as the ToL3 championship belt and other prizes!

For each $650 raised, we will add one Japanese invite to the tournament.

Join us in carrying the banner of Super Street Fighter 2: Turbo for 2018 and beyond!

EVERY DONATION IS APPRECIATED, EVEN IF IT’S JUST A DOLLAR! THANK YOU!

$50 – ToL3 T-Shirt or Unsigned ToL3 Poster – The ToL3 T-shirt will feature the ToL3 logo on the front and the “tour dates” on the back! (Please specify which item you would like when making this dontation)

$75 – ToL3 Official Program – Our ToL3 program will be filled with all sorts of tidbits about ToL3, the history of ToL, and other Super Turbo nuggets!

$100 – Signed ToL3 Poster – The tradition continues with the iconic ToL poster signed by all the qualifiers. A collector’s item that will be the gem of your collection!

$200 – Signed Poster + Program + T-Shirt + Mousepad – If you really like to help out the cause consider this donation and get all the ToL goodies in one package!

END_OF_DOCUMENT_TOKEN_TO_BE_REPLACED 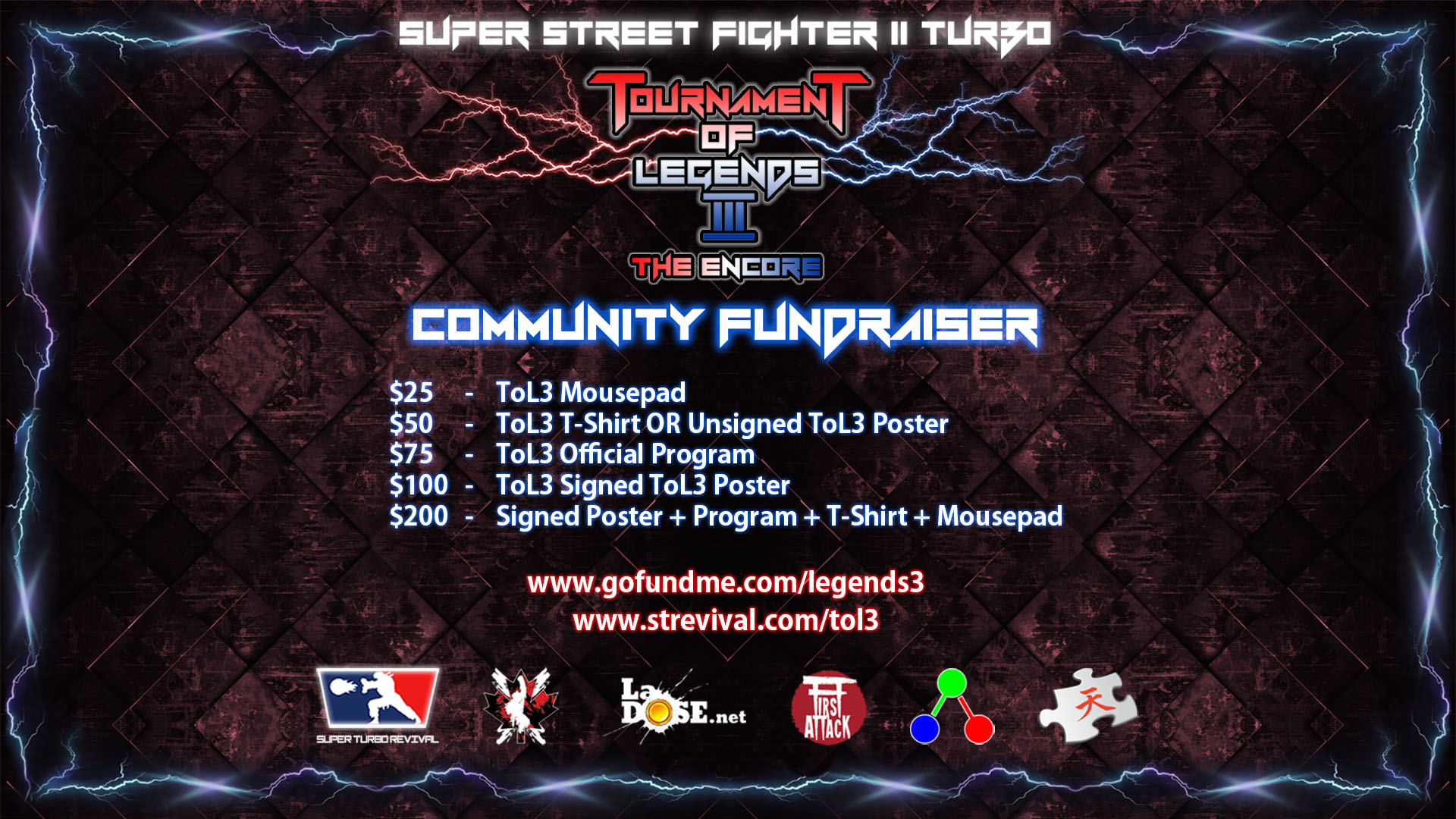 First Look at the TOURNAMENT OF LEGENDS 3 Poster!

With the first qualifier in the bag after last week’s Winter Brawl, the initial version of the ToL3 poster is here with krost as the lone qualifier!

Keep checking back to the TOURNAMENT OF LEGENDS III page to view the latest version of the poster. The next qualifier takes place March 16-18 at Final Round. Who will be the next to be immortalized on the ToL3 poster? 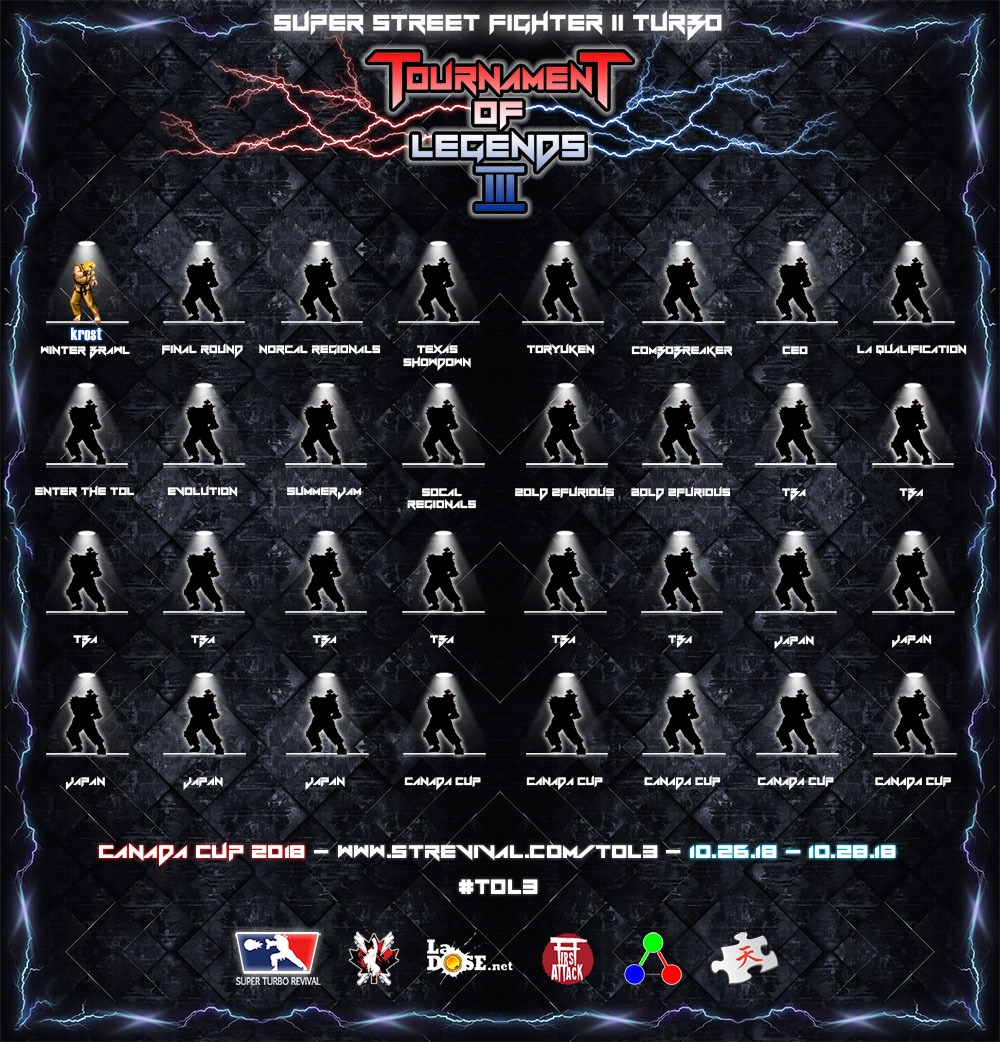 Congratulations to krost for becoming the first ToL3 qualifier be defeating Psychochronic in the grand finals of Winter Brawl 12!